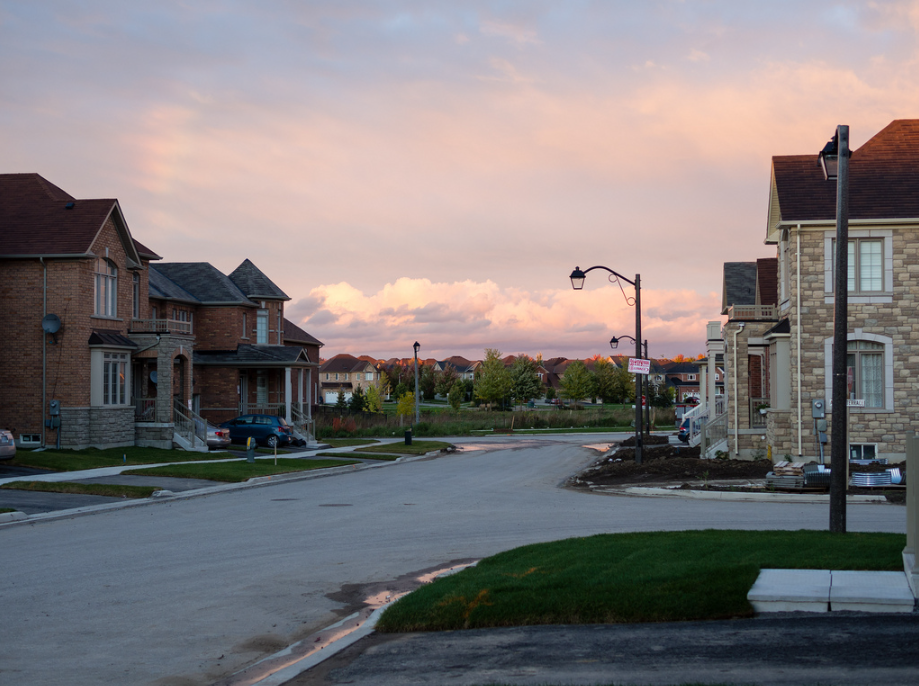 Vicky Vyas longed for a low-maintenance, less-isolated existence: no more shovelling snow and long drives from one distant location to the next. So, with her two preteen children in tow, she moved into the city from the suburbs of Brampton.
The family abandoned their four-bedroom raised bungalow for a three-bedroom condo in Liberty Village. Finding a unit spacious enough to accommodate two growing children is like winning the housing lottery, as developers play catch-up to the trend of young families nesting in high-rises.
Liberty Village’s insular community, with all the conveniences within walking distance, was the ideal neighbourhood to transition into city living, Vyas says. There, it felt like a self-contained neighbourhood with its own set of parks, restaurants, schools, and other local businesses.

Vyas was able to score a 1,350-square-foot unit, with a 400-square-foot terrace. It’s much larger than the average condo size of 797 square feet in Toronto, which can feel cramped for a family of three. To ensure each of her children—one boy and one girl—had a room, she fashioned the den into a bedroom.
For many families, condo living is a no-brainer sacrifice that affords them the option of staying in the city, where the average price of a detached home rose over $1 million this year.
But for Vyas, who belongs to this growing cohort, living in a condo hasn’t involved a huge compromise, and the idea of a condo as merely a starter home or a temporary roof doesn’t apply.
She has no intention of trading in the condo lifestyle for the space she once had in the suburbs.
“I have a different mentality about the space,” says Vyas. “It’s more about the location than the space.”
In fact, she just traded in that Liberty Village unit for a 1,210-square-foot condo in the neighbourhood of St. Lawrence Market. The quarters are tighter, with one fewer room, but it has the luxury of being located in one of Toronto’s cultural landmarks. Her children still have their own rooms, while she sleeps in a Murphy bed.
However, Vyas admits it does help that her boyfriend lives in the same building, which lends her a bit of breathing room.
What many families in the market for a condo typically seek is an open-concept layout, which allows them to configure the space in a way that makes sense for them, say Erica Smith and Lorena Magallanes, real estate agents and founders of Condo Chicks.
Though many of their clients with families often hold out for at least 1,000 square feet, the interior space isn’t their primary concern. Staying in the city can actually be more affordable than having to commute from the suburbs, says Magallanes. And it saves them the hassle of maintaining the upkeep of their home, especially when both parents are working.
“Almost all [our clients] work downtown….They want that ‘turn-key’ lifestyle,” adds Smith. “They don’t want to have to deal with the maintenance of the home.”
Smith, along with her husband and two toddlers, also first settled into a condo at St. Lawrence Market. They stayed for about five years before moving into a house in the east end to be closer to her parents, who could help with child care. If it hadn’t been for that reason, Smith says her husband “would have stayed there forever.”
Condo developers are taking note of the need for child care—and schools. Some are incorporating daycare spaces into their development proposals, say Smith and Magallanes. Others, such as Concord CityPlace, have added child-care facilities as the demographics of the neighbourhood have grown to include young families.
For some, having common areas in the building and green spaces nearby can be enough to substitute for a backyard, says Smith.
For its part, the City of Toronto is conducting an ongoing study into how families have “hacked” condo living [PDF], in an effort to make recommendations for Council to consider when it’s presented in 2017.
However, the perception that condos aren’t built with families in mind endures. Paul Chan and his husband, Ewan French, who run Modern Family Realtor, decided to give up their condo in Liberty Village for a house in Forest Hill. 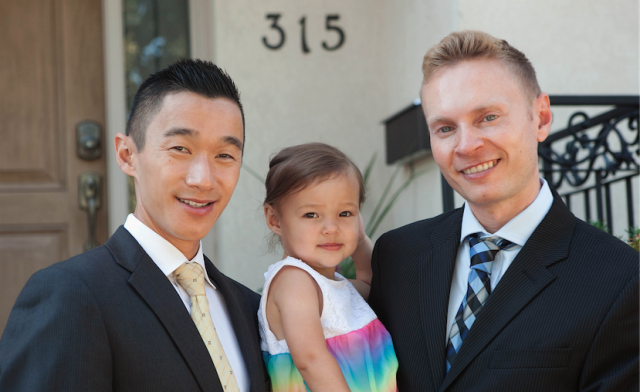 Paul Chan and his husband, Ewan French, with their daughter, Jasmine. Photo: Contributed.

They stayed for about five years, but started to outgrow the area itself. As parents of a toddler, they started to feel out of place in a neighbourhood still largely associated with dogs and young, single professionals.
Finding the right school in the area was also a challenge for the couple, which ultimately pushed them to leave. “We knew we wanted to move before Jasmine headed to kindergarten,” says Chan.
Meanwhile, Vyas’s children have grown to embrace the lifestyle living in the city affords—for preteens that often means more independence. Her daughter’s walk to school takes 10 minutes, while her son commutes via streetcar on his own; he’ll gradually learn to take the subway by himself.
If they hadn’t made they move, they would still be entirely dependent on Vyas to get to places. “As they get older,” she says, “this is where they want to be.”